Quests just got a whole lot BIGGER! Now you can send not one, but a whole team of your best & brightest ponies on an adventure with Group Quests. And to kick things off, you’ll set off for six new missions of friendship! Plus, there’s lots of new pony friends to meet and buildings to add to your Ponyville!

GROUP QUESTS: Pick a pack of ponies to set off on an epic journey for possibly huge rewards. You’ll even help them along the way by making tough decisions to solve unexpected situations!

MORE HOUSES: Your ponies will feel right at home with the Royal Legion’s Barracks, Ritzy Boutique, Buckball Field and other awesome abodes.

FRESH DÉCOR: Deck out your town with the latest in decorations, like Dr. Hooves’ Timebox, Ambassadors' Airship, Cloudsdalian Tapestry, Daybreaker’s Throne and much more!

Download the update now to join this amazing new adventure!

The Quick Update was done on the loading screen when you entered the game on May 19, 2018. It added a number of new characters. 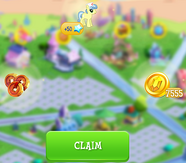 Retrieved from "https://mlp-gameloft.fandom.com/wiki/Update_4.3?oldid=74529"
Community content is available under CC-BY-SA unless otherwise noted.