The My Little Pony Gameloft Wiki
Register
Don't have an account?
Sign In
Advertisement
in: Characters, Sweet Apple Acres characters, Unlocks at Level 24

Twist is a school age filly with a cutie mark of two candy canes in the shape of a heart. Even though she has her cutie mark, in game she lives in the Cutie Mark Crusaders Clubhouse.

Twist is named using her full name, Peppermint Twist, in the album.

Twist was one of the characters available in the beta version of My Little Pony presented at My Little Pony Project 2012 New York, at a cost of 30,000

Prior to the Sweet Apple Acres update, she cost 90

. Afterwards, she was switched to a prize from the Crystal Mine Game.

Twist must be cost 90

but in the first nine versions of the game if the social networks was switched off, you could purchase her for 30,000

. But become an exclusive reward for Equestria Girls 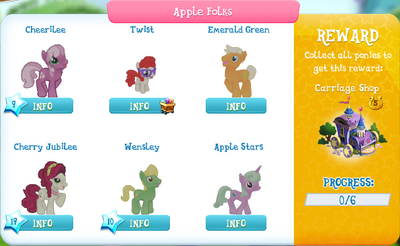 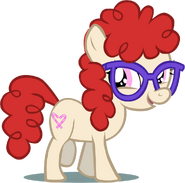