The My Little Pony Gameloft Wiki
Register
Don't have an account?
Sign In
Advertisement
in: Characters, Ponyville characters, Unlocks at Level 1,
and 2 more

Trixie Lulamoon is a pony talented in magic and a rival of Twilight Sparkle. She lives in Trixie's Caravan in Ponyville. She is voiced by Kathleen Barr, and when tapped, says "I am the Great and Powerful Trixie!".

Trixie must be won from the Balloon Pop but in the first two versions of the game if the wifi is switched off, she cost 17,600

, but during the Nightmare Knights event, she can be bought for 3,200. After, she was an event premium.

Although the player is required to buy her in Ponyville, she works with Thorax, Discord, and Starlight Glimmer in a series of quests within the Changeling Kingdom as the four attempt to defeat Queen Chrysalis and save Equestria. There, she is already available to complete the quests.

Album showing Trixie with the name "Trixie the Magnificant". 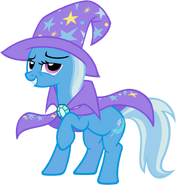