Sweetie Belle is Rarity's younger sister and the youngest daughter of Magnum and Betty Bouffant, and a founding member of the Cutie Mark Crusaders. In game, she lives in the Carousel Boutique in Ponyville Prior to the Sweet Apple Acres update before later on in update 4.1, she was moved back to Carousel Boutique. She lived in Ponyville and she is unlocked at level 9. Prior to the Sweet Apple Acres update, she was available from level 1.

When My Little Pony was first released, Sweetie Belle cost 75

during the Hearth's Warming Eve 2012 update. It was lowered again to 20

, in the Hearth's Warming Eve Extended update. She costs 30

when offline. In Update 4.1 she was moved from Sweet Apple Acres to Ponyville with a price change from 20

Sweetie Belle can also be won from the Equestria Girls mini-game.

Sweetie Belle, named "Sweetiebelle" on her album page, was one of the characters available in the beta version of My Little Pony presented at My Little Pony Project 2012 New York. She was shown walking around Ponyville and playing Bounce Ball minigame. 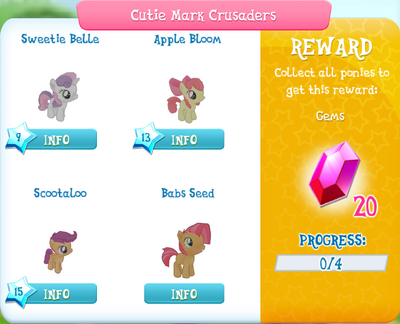 Flim, Sweetie Belle (with a cost of 75

), and Rarity in the shop in the first released version of the game. 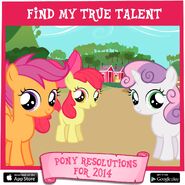 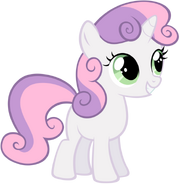