The My Little Pony Gameloft Wiki
Register
Don't have an account?
Sign In
Advertisement
in: Characters, Ponyville characters, Unlocks at Level ?,
and 2 more

Sombra is a male unicorn pony who lives in Ponyville. He is King Sombra's reformed self and also best friends with Radiant Hope.

He was released in Update 4.6.

He is the main character of the Siege of the Crystal Empire, and fights various bosses and minions to gain Shadow Crystals.

He can also have his own outfit at the Pony Editor to upgrade his fighting power, at the cost of many Shadow Crystals. The final form of this outfit is based on King Sombra’s Mirror-Universe counterpart. 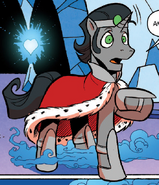