The My Little Pony Gameloft Wiki
Register
Don't have an account?
Sign In
Advertisement
in: Quest characters, Characters, Ponyville characters, Unlocks at Level 1

His purchase is required for the quest "Talented Flyers"P, with no skip option available.

when the game was first released. In the first two updates, if the internet on your device is off his price would change to 67,500

but can still be switched to the coin price depending on whether the wifi is on or off. In the 2013 valentines day update and onward, the price remained at 350

regardless to the internet conditions. He was dropped down to 250

in the 2013 Christmas Update. He occasionally goes on sale for 50% off.

Soarin, mistakenly identified as Fleetfoot, was one of the characters available in the beta version of My Little Pony presented at My Little Pony Project 2012 New York, at a cost of 67,500

. Surprise, mistakenly identified as Soarin, was also included in the beta at a cost of 275 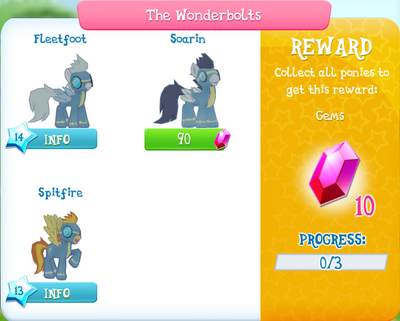 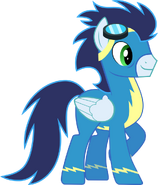 Filthy Rich, Jeff Letrotski, and Soarin (with a cost of 450

Filthy Rich and Surprise (mistakenly identified as Soarin) in the shop in the game beta presented at My Little Pony Project 2012 New York. Surprise was later changed to Fleetfoot.

Soarin (mistakenly identified as Fleetfoot), Magnum, and Silver Spoon in the shop in the game beta presented at My Little Pony Project 2012 New York.