The My Little Pony Gameloft Wiki
Register
Don't have an account?
Sign In
Advertisement
in: Quest characters, Characters, Canterlot characters,
and 3 more

He is voiced by Andrew Francis (not credited), and when tapped, says "Hey, Twily!" in one of two tones. Shining Armor was one of the characters available in the beta version of My Little Pony: Magic Princess presented at My Little Pony Project 2012 New York, at a cost of 350

He is a Helper in the Siege of the Crystal Empire, Best Gift Ever, and The Nightmare Before Hearth's Warming events.

in the Movie Time Update and unlocks at level 21 previously level 49. He can also be won in the Equestria Girls dancing game. 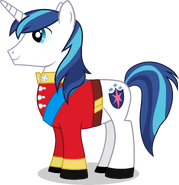 Silver Spoon and Shining Armor in the shop in the game beta presented at My Little Pony Project 2012 New York.