Twilight : Thanks so much for being here with me, everypony... I can't believe I'm gonna meet Starswirl the Bearded! You know ~~ outside of my dreams.

Starlight Glimmer : I can't believe you're actually going through with it... I'm all for pushing the envelope, obviously, but casting this spell... it's pretty out there for you, Twilight.

Sunburst : What's "out there" about saving the most Legendary ponies of all time from a thousand-year-old magical prison? Remember: It's not just Starswirl that's trapped there...

Starlight Glimmer : I know, I know... It's the other five Pillars of Equestria, too. ... But they sent THEMSELVES to Limbo when they banished the Pony of Shadows there! Maybe they knew what they were doing!

Twilight : Starlight... The Pony of Shadows was awful, but he's GONE now... and Starswirl is the greatest wizard who ever lived! The chance to have him back in Equestria... it's worth the risk.

Twilight : Now: We have artifacts from each of the six Pillars, so we should be ready to cast the spell and set them free! Sunburst, you supervise; Starlight, I'll need you to cast it with me.

Starswirl the Bearded : What... what has happened?!

Twilight : It... it worked! We brought you back! You and the others have been trapped in Limbo for over a thousand years, but I figured out how to get you ho--

Starswirl the Bearded : What?! No, no, no, NO! You must undo what you've done! You cannot bring ONLY the Pillars back!!!

Pony of Shadows : Muahahaha... Your pitiful attempt to imprison me has failed, Starswirl! But don't fret... When I extinguish the light and hope of this miserable world, you won't remember any of this!

Starswirl the Bearded : This is not over, young meddler... if we are to banish the Pony of Shadows once more, it will require a sacrifice of great magical power. Unless you have a better idea, that is...

Twilight : Keep it together, Twilight... keep it together... You just unleashed ultimate evil and doomed Equestria because you were obsessed with meeting your idol! Just... keep researching.

Starlight Glimmer : Hey, Twilight! The others are still out searching for the Pony of Shadows, but... uh... Are you okay?

Twilight : Just a second, Starlight. Portal gate... Portal keys... Portal spells... Yes! If the Pillars can hold open the gateway to Limbo, a powerful pony can do the banishing spell herself!

Starlight Glimmer : That's great... but is banishment really the only option? I mean, it's been a long time... Maybe the Pony of Shadows is ready to talk?

Starlight Glimmer : I was talking with the other Pillars... They knew the Pony of Shadows before he became what he is now. His name was Stygian... and they were FRIENDS, Twilight! This whole plan just seems... wrong.

Quest #3: Light in the Darkness

Starswirl the Bearded : Twilight... ready yourself for battle. Your enchanted map has summoned all of your companions to the Hollow Shades ~~ where the Pony of Shadows no doubt makes its lair.

Starswirl the Bearded : The Pony of Shadows wanted more power than he had, and that desire led him down a path from which there is no return! There is NO WAY to befriend a pony like that. Now ~~ let us go!

Twilight : Starlight... I... I hope I'm doing the right thing, but we have to take care of the Pony of Shadows somehow... Everypony! Get behind me!

Pony of Shadows : Hahaha... Your days of glory are through, Starswirl! Now, MY dark power will reign, and your six will bow to me... and ALL ponies will feel the despair I did when you cast me out!

Starswirl the Bearded : We did what we had to do... You tried to steal our powers for yourself!

Rarity : Goodness! There certainly seems to be history, there... ah... Mistmane, right? I have the funniest feeling that we've met before...

Mistmane : Who can say for certain? Stranger things have happened...

Starswirl the Bearded : The time is now, Twilight! Push him into the portal!

Twilight : Wait! Inside all that shadow... Is there a pony in there?!

Mage Meadowbrook : Gracious! I've seen a lot in my day ~~ but I never would've expected THIS!

Somnambula : I agree! That yellow pegasus is an EXACT DOUBLE of a young mare I honed my motivational speaking skills upon so many years ago! WHAT ARE THE ODDS?!

Twilight : Are you... Stygian?! Starswirl says you betrayed the Pillars... that you wanted their magic...

Stygian : NO! I wanted their respect! I brought them together... planned their strategy... but I didn't have magic or strength, so nopony ever noticed me. So I became stronger than any of them!

Twilight : But... this is all a misunderstanding! If the Pillars knew how you felt, I'm sure they wouldn't have turned their backs on you. The shadow isn't who you really are...

Starlight Glimmer : It's true! I wasn't so different from you, and Twilight helped me change. If there's one pony in Equestria that can save a friendship, it's her.

Twilight : And it's everypony here, too! Stygian needs to fight the darkness... but he can't do it alone!

Starswirl the Bearded : Then we must help him! Pillars ~~ call on your elements! SORCERY!

Starswirl the Bearded : I accept your apology, Stygian... one that's long overdue. Long ago, you needed our help... but instead of listening, we turned our backs on you. Pride clouded my judgement... but no longer!

Starlight Glimmer : We did it! The Pony of Shadows disappeared... leaving Stygian behind in his place! Which means... *AHEM* Apparently, a conversation can save Equestria, huh?

Starswirl the Bearded : Heh heh... Something tells me you will be making a LOT of apologies today. 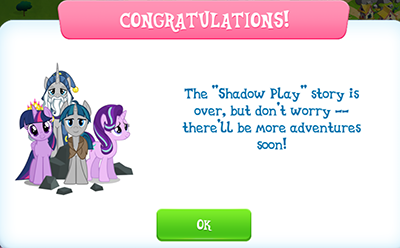 Retrieved from "https://mlp-gameloft.fandom.com/wiki/Shadow_Play?oldid=81980"
Community content is available under CC-BY-SA unless otherwise noted.