Sapphire Shores was originally unlocked at level 47; this was later lowered to 40. Before being switched to a prize in the Crystal Mine Game in the Sweet Apple Acres update, she cost 200

in the first nine versions of the game if the player's social network was turned off.

Sapphire Shores was one of the characters available in the beta version of My Little Pony presented at My Little Pony Project 2012 New York, at a cost of 90,000 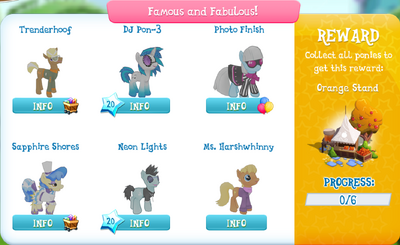 Rainbow Dash, Sapphire Shores, and Unicorn Guard in the shop in the game beta presented at My Little Pony Project 2012 New York.
Add a photo to this gallery
Retrieved from "https://mlp-gameloft.fandom.com/wiki/Sapphire_Shores?oldid=84596"
Community content is available under CC-BY-SA unless otherwise noted.