The My Little Pony Gameloft Wiki
Register
Don't have an account?
Sign In
Advertisement
in: Pages with non-numeric formatnum arguments, Quest characters, Characters,
and 4 more

Rainbow Dash is a member of the mane 6 and who represents the Element of Loyalty. She lives in her Cloudominium in Ponyville with her parents Bow Hothoof and Windy Whistles. She is voiced by Ashleigh Ball.

While visiting Canterlot, Rainbow Dash will stay at the Canterlot Inn. She cannot be assigned to work in Canterlot Shops, but you can play with her.

Rainbow Dash was one of the characters available in the beta version of My Little Pony presented at My Little Pony Project 2012 New York, at a cost of 300

Rainbow Dash is a playable character in the Equestria Girls mini game.

When the game was first released, Rainbow Dash cost 500

during the Hearth's Warming Eve 2012 update, and again to 65

Rainbow Dash has an unique random animation (jumping on a cloud). She will also do two different types of cartwheels in the air

When tapped, Rainbow Dash will randomly respond with a short quote.

Additionally, at the start of the Clear the Skies minigame, Dash will say either "Come on, Rainbow! Show 'em a little dash!" or "Ten...seconds...flat!"

For Nightmare Night/Halloween Rainbow Dash wears a Shadowbolt outfit. The one she wears in the episode "Luna Eclipsed".

Mayor Mare and Rainbow Dash in the store in the game beta presented at My Little Pony Project 2012 New York.

Magnum, Rainbow Dash (shown as becoming unlocked at level 43), and Prince Blueblood in the store in the first released version of the game. 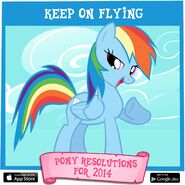 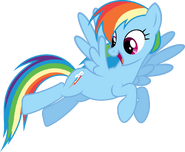 Rainbow dash in the carousel boutique.

Rainbow Dash as a Shadowbolt in game

Rainbow Dash in the store when the game was first released.