The My Little Pony Gameloft Wiki
Register
Don't have an account?
Sign In
Advertisement
in: Quest characters, Characters, Canterlot characters,
and 4 more

When tapped, Cadance says "I'm Princess Cadance"; her voice is provided by Britt McKillip, who is not credited for the role.

Like Princesses Celestia and Luna, Cadance starts out at five stars and can't play minigames except for the Crystal Mine Game minigame.

In the first released version of the game, Princess Cadance cost 650

in the Movie Time Update, and was later lowered again, to 90

in the 2013 Christmas Update. She is unlocked at level 21 previously level 49.

Cadance can also be won in the Equestria Girls mini-game.

Cadance issues the quests "Cleaning Up Canterlot"C and "Galloping Maiden"C. Welcoming her is the task in "Here Comes the Bride"C, and she is mentioned in the intro or outro text of "Maid to Serve"C, "Gift Horse"C, "Chariot of Love"C, "Change of Plans"C, "Rise and Shine"C, "Changing the Queen"C, "Bride and Groom"C, and "Here Comes the Bride".

Because the wedding was originally meant to be held in Ponyville, the final series of Ponyville quests also focus on Cadance, Shining, and the wedding. She issues the unused quest "Best Wedding Ever"P. The first task in "A Princess for Ponyville"P is to welcome her, and is completed once she arrives in Canterlot, and the first task in "Sky High Ponies"P is to raise her to five stars. She is mentioned in the intro or outro text of "A Princess for Ponyville", "Courting the Princess"P, "Sky High Ponies", and the unused quest "Mare and Colt"P. 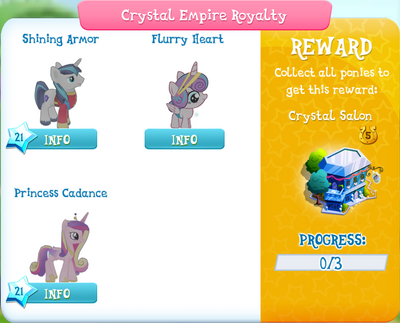 Princess Cadance in the Minecart minigame 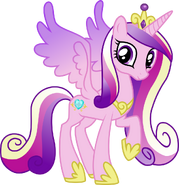 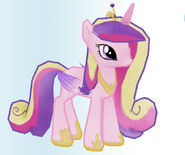