Night Light is Twilight Sparkle and Shining Armor's father, the father-in-law of Princess Cadance and Flurry Heart's paternal grandfather, and Twilight Velvet's husband. He lives in Canterlot in the Sparkle Family Home. He is available at level 40; raised from 30.

Although simply credited as "Mr. Sparkle" in the show, Twilight's Dad is officially named "Night Light" in comics, trading cards, and other media.

Prior to being given an official name, he received several fan names; the two most commonly used were "Night Light", named after the similar-looking G1 Earth pony mare Nachtlicht, and "Crescent Sparkle", named after his Cutie Mark. 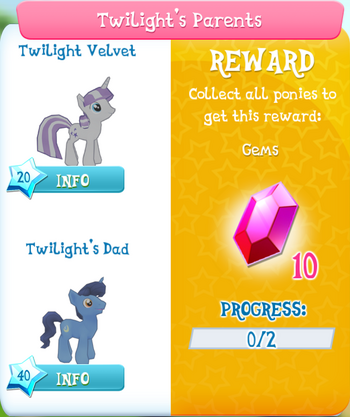 Night Light Vector
Add a photo to this gallery

Retrieved from "https://mlp-gameloft.fandom.com/wiki/Night_Light?oldid=78246"
Community content is available under CC-BY-SA unless otherwise noted.