The My Little Pony Gameloft Wiki
Register
Don't have an account?
Sign In
Advertisement
in: Characters, Ponyville characters, Quest characters,
and 2 more

Muffins, (known as Derpy in My Little Pony: Friendship is Magic series) or normally called "the pony in the box",[notes 1] is a playable and non-playable character in My Little Pony: Magic Princess. She is a wall-eyed Pegasus with a gray coat and yellow mane and eyes, and her cutie mark is a group of bubbles. She is seen hiding in a box with a small rectangular hole cut out for her to see through. If tapped, she will be uncovered and drop 20

, and has about a one-in-three chance of also dropping 1

. She will then disappear to hide again, reappearing not long after again. Muffins typically spawns inside her box, but she can also spawn standing perfectly still with no box.

Muffins is well-liked by the other characters; Pinkie Pie, Applejack, and Twilight Sparkle explicitly refer to her as their friend in the intro text of the quests they issue the player to find her (Pinkie calls her "my quirky little pony pal" in "Everybody's Favorite"P, Applejack calls her "my li'l wide-eyed pony pal" in "Eye See You"P, and Twilight calls her "my wild-eyed pony pal" in "What a Strange Pony"P), and Pinkie's quest is even named "Everybody's Favorite". After Muffins is uncovered, other characters will go well out of their way, even into still-covered expansion zones, to interact with her.

The playable Muffins was added on Update 4.3.

Muffins has several unique animations. The first being her posing with her head up and all four hooves on the ground when she is uncovered. The next is of her falling down. She will fall both when walking and when flying. Muffins will also skip in place and fall down.

Muffins also appears in the Apple Bobbing Stall, which was available as part of the Nightmare Night 2013 update. Tapping the stall causes Muffins to stick her head out of the barrel and look around before diving back into the water.

During the holidays, Muffins' box is decorated like a present wrapped with green paper and a red ribbon and bow.

After the 2.4 update, once Twilight Sparkle becomes an alicorn, Muffins spawns in Ponyville without her box. She stands perfectly still until tapped.

This can happen after purchasing the two playable Muffins (both normal and disguised as Dr. Caballeron) and tapping the non-playable Derpy. 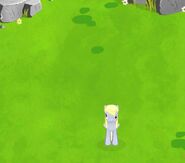 Muffins spawns without a box. 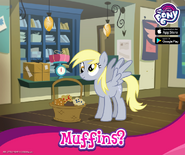 Muffins in the Apple Bobbing Stand.

Muffins as the Hearth's Warming Angel.