Rarity : I DO appreciate you showing me the way to the phoenix's nest, Spike.

Spike : Anything for you, Rarity! Besides, I've been meaning to visit Pee Wee.

Rarity : He really was an excellent pet. I can't imagine why you set him free!

Spike : Phoenixes aren't meant to be domesticated. Even in the wild, they like to keep to themselves.

Rarity : Oh! THERE they ~~ Ah... Spike? What are you doing? Are you trying to cover something up on your face?

Spike : Rrrgh... It's nothing... it's just a stone scale. It isn't magical or anything like the call of the Dragon Lord ~~ it's just red and itchy and embarrassing!

Rarity : Ohh, precious pants... That DOES look uncomfortable. But even I get the odd blemish from time to time! it's nothing to be embarrassed about.

Milestone #1: Feather in Your Cap

Spike : Thanks for the suggestion, Rarity... but I don't want anypony else to see this. Not even Zecora!

Spike : Oh, GREAT. It hasn't cleared up, has it? That's it! I'm not leaving the castle until my face is back to its adorable self.

Twilight : Oh, Spike... I'm sure it feels terrible, but it's just a breakout! It's not the end of the world. Now... do you still want to help me practice my lecture for my class toda~~

Quest #3: A Case of Indigestion

Rarity : Oh ~~ there you are, Spike! My, what a fetching ensemble you've put together. Very noir-esque! I believe Shadow Spade herself would approve.

Rarity : ... But I wonder if you wouldn't mind taking it off. It's just that I absolutely MUST have a model for my phoenix-feather dress, and nopony else is available!

Rarity : Wait ~~ what? I'm sorry, Spike, I didn't hear you ~~ my ears are a little bit clogged or something! Where did you say you were going? 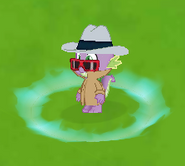 Spike will appear as this for this quest, and occasionally in unowned areas afterwards. If you tap him, he will disappear and leave some Bits and Scales.

Quest #5: What Pairs with Fire-Feathers?

Enraptured Fanfilly : E-Excuse me... could you slow down a bit? We've come a long way to see this school... I don't wanna miss anything. (Also... uh... do all the dragons at this school suffer from scale issues?)

Enraptured Fanfilly : ... I'm sorry, what was that? Did you say "fireworks show"?

Spike : I SAID I DON'T KNOW!!! NOW: THIS IS THE SCHOOL LIBRARY! IT'S ONE OF THE MOST SERENE SPOTS ON CAMPUS! WHERE STUDENTS CAN SPEND TIME IN QUIET REFLECTION!!! ... OR STUDY!!!

Smolder : Could you please stop shouting? We're trying to do our homework, and it's kind of distracting.

Smolder : Oh, right, you've been living with ponies your whole life. Molting's just part of growing up as a dragon ~~ It's completely normal! Pretty soon, your loved ones will kick you out, and...

Smolder : I think it's biological. Part of it's the smell... I mean, I loved my brother and all, but one whiff and I was all, "See ya!" Plus, that molt stench is just a MAGNET for predators...

Spike : So Twilight's going to kick me out of the castle, and THE ONLY CREATURES WHO DON'T FIND ME DISGUSTING WANT TO EAT ME?!?!

Spike : ... I didn't know where else to go except to you, Zecora! I can't take the chance that Twilight will kick me out... Is there anything you can do to cure me?

Zecora : The ailments you have aren't something to cure. The molt's a condition that dragons endure!

Spike : But if anypony sees OR smells me right now, they'll avoid me forever!

Zecora : Perhaps we can lessen this strange molt effect. The smell is the most likely cause, I suspect... I'd brew you a potion to help keep it down, if I had the proper ingredients around.

Rarity : I'VE NO IDEA WHAT HAPPENED! ONE MINUTE I WAS SEWING PHOENIX FEATHERS ONTO A DRESS, AND THE NEXT, I COULDN'T HEAR MY OWN VOICE!

Zecora : the feathers of that bird can affect ponies' ears... It's a magical ailment I've treated for years.

Zecora : Try this simple cure: Just one or two drops in each of your ears will have you feeling tops!

Rarity : OH, THANK YOU! YOU'RE AN EAR SAVER, OH! AND WHILE I'M HERE, DO YOU HAVE ANY BLEMISH CREAM?! SIPKE IS HAVING SOME SCALE ISSUES.

Milestone #3: Don't Call It a Cover-Up

Spike : Is Rarity gone yet? I can't get out of here until she leaves, and I don't know how long I CAN KEEP FROM ACCIDENTALLY YELLING!!!

Rarity : Ooh! I think I heard something. ZECORA! YOUR CURE IS WORKING ALREADY!

Zecora : Rarity's gone, Spike; there's no need to hide. I'm glad that you finally ventured outside! ... But I can't treat your symptoms down there on the ground. It's safe to come out: There's no ponies around!

Spike : I'm not hiding from ponies, Zecora... I forgot to mention that my molt smell attracts predators ~~ I'M HIDING FROM THAT GIANT ANGRY EAGLE THING!

Zecora : That's something that would have been quite nice to know ~~ but talking's not worth it right now! We should goooAIIIEEEE~~!

Quest #13: A Failure to Communicate

Rarity : WHY, SPIKE ~~ YOUR STONE SCALES LOOK WORSE! OH: HERE, I PICKED UP JUST THE~~

Twilight : Uh... Spike? What are you doing? I was headed to Zecora's to get some cream for your scales, but I had no idea you were... Wait, is that a giant Roc carrying Rarity?

Spike : And Zecora! I tried to save them, but it's all I can do to stop scratching long enough to dive out of the way when it attacks!

Spike : Rrrgh... I feel so useless! I should be FIGHTING that bird right now ~~ you know, like we usually do! With helpers and everything!

Quest #15: Dance of the Dragon

Spike : I have NO idea why I have wings now ~~ but they're pretty awesome!

Twilight : Spike! How did you--?! ... You know what, it doesn't matter. Do you think you can fly up and distract the Roc so that Zecora and Rarity can get free?

Spike : Watch me! HEY, GIANT CHICKEN! If you like dragons so much, come and get me!!!

Zecora : We are! Spike, your molt has produced many things, but I'm glad that the last was a new pair of wings!

Rarity : YES, AND ALSO I'M GLAD YOU GOT WINGS! (Goodness, I actually heard that! I must be on the mend...)

Spike : Thanks, but... I should go. I'm molting... and in the Dragon Lands, families make molters leave home. Besides... what if something even worse happens to me later?

Twilight : Well, this isn't the Dragon Lands, and molting or no, I don't want you going anywhere. You're supposed to grow up, but you'll always be you!

Twilight : Spike... Don't worry. Whatever you're going through, we'll get through it together!

Rarity : Of course, darling! I can't believe you thought any of us would send you away!

Rarity : Even if the symptoms WERE slightly unsettling, nopony would stop caring for you just because you're getting older. Everypony changes... but sometimes change can be wonderful!

Rarity : And we're happy FOR you, Spike! Now, about you modeling that phoenix-feather dress: I've got a VARIETY of potential lengths I'd like to try out, you see...

During the early stages of this quest, Spike will appear with this disguise in any other mission where he is featured.

Add a photo to this gallery
Retrieved from "https://mlp-gameloft.fandom.com/wiki/Molt_Down?oldid=78562"
Community content is available under CC-BY-SA unless otherwise noted.