The My Little Pony Gameloft Wiki
Register
Don't have an account?
Sign In
Advertisement
in: Quest characters, Characters, Canterlot characters,
and 2 more

Minuette is one of Princess Cadance's bridesmaids and has a hourglass cutie mark, and lives in Minuette's House in Canterlot. She became available during the Canterlot update.

in the Spa Update and unlocks at level 13 (previously 18).

She then became 20 gems in a later update.

Now in the recent daring do update she costs 60000 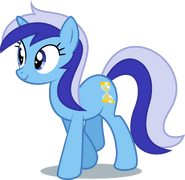 Vector image of Minuette, as she appears in the show.

Promotional image advertising Minuette at 50% off for Spring 2014. 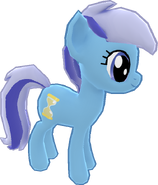