The My Little Pony Gameloft Wiki
Register
Don't have an account?
Sign In
Advertisement
in: Characters, Five-star characters, Canterlot characters,
and 5 more

Similar to Princess Celestia and Princess Luna, King Sombra will occasionally do a unique animation and generate one of each of the Element Shards. He also shares royal sisters' arrival animation (flying on his own instead of hot air balloon) though he doesn't have wings.

Like Princess Cadence, he starts with five stars, but cannot participate in the Magic Wings and the Minecart minigames. 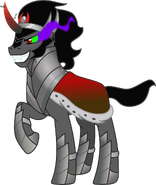