The My Little Pony Gameloft Wiki
Register
Don't have an account?
Sign In
Advertisement
in: Characters, Ponyville characters, Unlocks at Level 1

Hondo Flanks is Rarity's and Sweetie Belle's father and Cookie Crumbles's husband. He lives in the Carousel Boutique with Rarity and his wife. He must be won in the Balloon Pop

minigame. In the first two versions of the game if the wifi is switched off, he cost 70,000

Hondo Flanks was one of the characters available in the beta version of My Little Pony presented at My Little Pony Project 2012 New York, at a cost of 70,000

. He usually wears his light ocean blue coat with some white coat. He has thick, brown eyebrows with a brown mane and tail. He's pony coat color is grey, and his hooves, cool grey. He also has a brown mustache, and has a blue eye color. He seems to be usually wearing his hat. 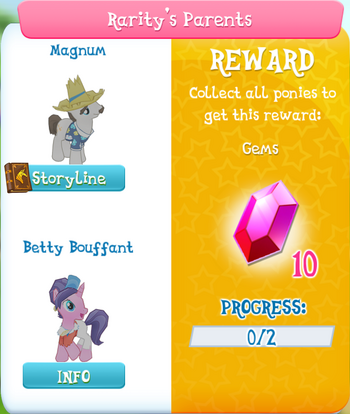 Fleetfoot, Hondo Flanks (Magnum), and Silver Spoon in the shop in the game beta presented at My Little Pony Project 2012 New York.
Community content is available under CC-BY-SA unless otherwise noted.
Advertisement