Forsythia loves flowers and spring. She lives in her own house. Her cutie mark is of flowers and she shares the same mane and tail style as Rarity. She lives in Forsythia's House in Ponyville. She was added in the Easter Update in the iOS version and on the android version she was added on the Canterlot Wedding Update due to the fact that the Easter Update was only released on iOS. She used to cost 28800

before later reduced to 7000 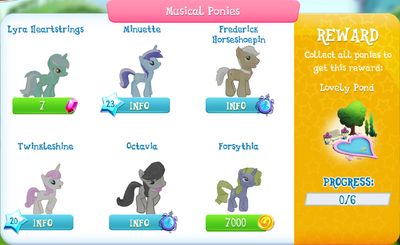 Retrieved from "https://mlp-gameloft.fandom.com/wiki/Forsythia?oldid=73809"
Community content is available under CC-BY-SA unless otherwise noted.