The My Little Pony Gameloft Wiki
Register
Don't have an account?
Sign In
Advertisement
in: Quest characters, Characters, Ponyville characters,
and 3 more

Fluttershy is a member of the Mane Six. She represents the Element of Kindness and lives in Fluttershy's Cabin in Ponyville. She is voiced by Andrea Libman, who also voiced Pinkie Pie.

While visiting Canterlot, Fluttershy will stay at the Canterlot Inn. In Sweet Apple Acres, she stays in the Sweet Apple Guest House. As for others, she also staying in Crystal Inn in Crystal Empire and in Patchwork Tavern in Klugetown. She cannot be assigned to work in any of the Shops in these places.

Fluttershy was one of the characters available in the beta version of My Little Pony: Magic Princess presented at My Little Pony Project 2012 New York, at a cost of 47,500

Fluttershy has an unique random animation (marveling at a butterfly).

When tapped, Fluttershy will randomly respond with a short quote.

Additionally, at the start of the Clear the Skies minigame, Fluttershy will say either "Yay." or "You're, going, to, LOVE ME!!!!"

In October 2013, during the Nightmare Night update, Fluttershy was seen wearing a bunny costume.

The More, The Merrier

The Sun and the Moon

For Nightmare Night Fluttershy shows up in a Bunny outfit in game. She was suppose to be in "Luna Eclipsed" in this outfit but she was cut out. 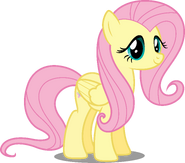 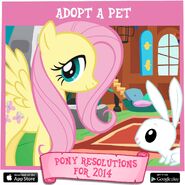 Fluttershy Icon on the Movie Time Update and The Spa Update.