The My Little Pony Gameloft Wiki
Register
Don't have an account?
Sign In
Advertisement
in: Characters, Ponyville characters, Unlocks at Level 17

Flim (and his twin brother Flam) sells low quality cider in Ponyville. He and Flam live in the Cider Machine and operate the Balloon Pop Stand, although they no longer appear there from Update 4.2. He also appear as an announcer in the Events tab.

Flim was one of the characters available in the beta version of My Little Pony presented at My Little Pony Project 2012 New York, at a cost of 17,600

Prior to the Sweet Apple Acres update, he cost 80

Flim must be cost 80

but in the first nine versions of the game if the social networks was switched off, you could purchase him for 18,400 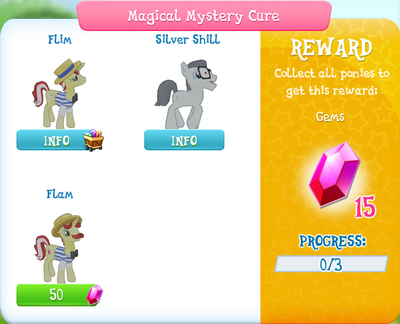 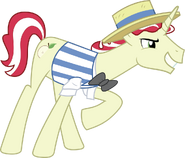 Braeburn, Flim, and Rarity in the shop in the game beta presented at My Little Pony Project 2012 New York.

Flim, on the screen for weekly challenges, in an older version.