The My Little Pony Gameloft Wiki
Register
Don't have an account?
Sign In
Advertisement
in: Pages with non-numeric formatnum arguments, Quest characters, Characters,
and 2 more

Fancy Pants is a very important pony. Whereas he lives in Canterlot in the show, in-game he lives in Ponyville.

Fancypants was one of the characters available in the beta version of My Little Pony presented at My Little Pony Project 2012 New York. He was shown walking around Ponyville.

Fancypants currently costs 16 monocles; when the game was first released, he cost 100

in the Movie Time Update then back to 50

in the 2013 Christmas Update. You can also win him from the Equestria Girls mini-game. 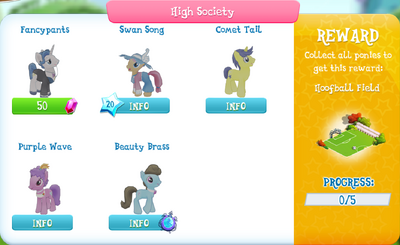