The My Little Pony Gameloft Wiki
Register
Don't have an account?
Sign In
Advertisement
in: Characters, Ponyville characters, Unlocks at Level 1

Dr. Hooves is a pony based on Doctor Who. He lives in Dr. Hooves's House.

Dr. Hooves, named "Dr Whooves", was one of the characters available in the beta version of My Little Pony presented at My Little Pony Project 2012 New York, at a cost of 2,500

. From the game's release until version 1.2, he was named "Time Turner", the same name used in some merchandise, and had the description "Time Turner keeps Ponyville's clocks in sync, sets the hourglass for cider competitions, and takes care of all things timey-wimey."

Dr. Hooves must be won from Balloon Pop but in the first two versions of the game if the wifi was switched off, you could purchase him for 2,500 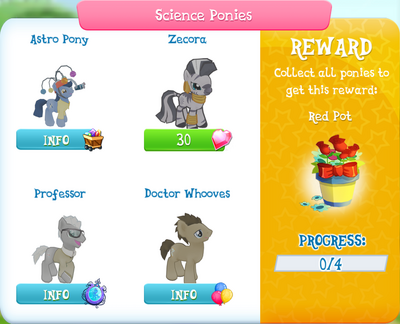 Unicorn Guard, Snails, and Dr. Hooves in the shop in the game beta presented at My Little Pony Project 2012 New York.

Snails, Dr. Hooves (as Time Turner), and Zecora in the shop in the first released version of the game.

Album page for Dr. Hooves when he was called Time Turner.