The My Little Pony Gameloft Wiki
Register
Don't have an account?
Sign In
Advertisement
in: Characters, Five-star characters, Ponyville characters,
and 4 more

Discord is a draconequus, element of Chaos. He lives in Throne of Chaos in Ponyville, but like Princess Celestia and Princess Luna, he also appears in Canterlot, where he stays in Canterlot Castle along with Starlight Glimmer. He was added in the version 2.4 update.

Like Celestia and Luna, he can drop one of each type of element shards. He also starts at 5 stars and can't play minigames.

Prior to his addition as a playable Character, a statue of Discord was available as a piece of Canterlot Decor; the Discord Statue can only be placed once.

Although the player is required to buy him in Ponyville and Canterlot, he works with Trixie, Thorax, and Starlight Glimmer in a series of quests within the Changeling Kingdom as the four attempt to defeat Queen Chrysalis and save Equestria. There, he is already available to complete the quests. 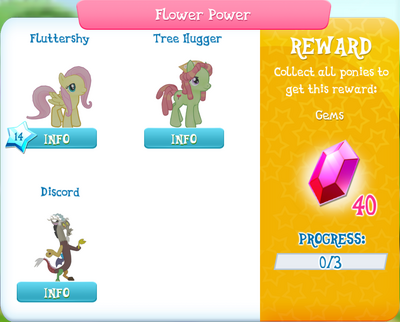 Discord dropping in with an umbrella 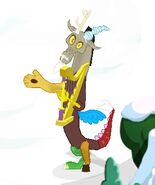 Discord as a musician

Discord has high-level talks with Luna and Mane-iac

Discord, Trixie, Starlight Glimmer, and Thorax at the Changeling Kingdom