The My Little Pony Gameloft Wiki
Register
Don't have an account?
Sign In
Advertisement
in: Pages with non-numeric formatnum arguments, Mini Games

The Crystal Mine mini game, based on the first-season episode "A Dog and Pony Show", was introduced in the April 3 2014 v1.8 update to My Little Pony. In this minigame you control a character riding a minecart through a wavy track. The goal is to collect coins, element shards, and power-ups along the track while jumping to avoid gaps and obstacles along the track that stop the cart.

Once you've reached level 5 (or updated the game and were past level 6) you'll get a message from Sapphire Shores.

Twilight Sparkle: She said that bit already. How... how can we help you?

Sapphire: I'm getting ready for my new tour, "Hooves Across Equestria", but I can't do it in the dress I wore for the last tour!

Twilight: Of course, we'd love to help! Ponyville's got the best mine in the whole world! If you want bling, we've got your thing!

... That sounded better in my head. Uh, c'mon Spike! Let's go mine carting!

This allows access to a permanent structure, the Crystal Mine, on the Ponyville, Canterlot and Crystal Empire maps. The mine is to the right of the Train Station in Ponyville and to the left of it in Canterlot. You also get a new collectible resource (minecart wheels

), and a new quest chain available in both Ponyville and Canterlot.

To play the minigame you need Wheels

. After the introduction you're given 3 to start (reduced from 5 since Update 4.0) and can get more randomly from shops, treasure chests gifted from friends, or by tapping on Derpy in her box as the game tells you. There is also a mine timer that gives one free wheel each hour, although the timer won't start again until you play the game again. You can only have a maximum of 3

at once (before Update 4.0, the maximum was 5), at which point the timer stops entirely. (Note: the scenery drop for wheels has been disabled as of the Hearth's Warming 2016 update, and is no longer available to players running Quick Update 3.2, Update 23 or newer.)

(before Update 4.0 the cost for one wheel was 1

). In the Windows version, you only have a maximum of 4 wheels and all of them are used after you selected a score multiplier Minecart. They generate every 6 hours each login, total of 24 hours. A wheel costs 1

and all four costs 6

. They are still obtained from Shops, Treasure Chests, Friends, Derpy, Decorations, Changelings and Parasprites. With changelings, only one wheel is needed to play the game, and you can get 4-5 wheels per changeling as long you play immediately after you get each wheel.

Tap the mine on the map or expand the blue arrow at the bottom of the screen to reveal the mine cart symbol to start the minigame. Click "Play Now!" on the intro Wheel album page (shown above right), which brings you to the game instructions, acted out in a quick animation by Rarity riding a minecart. Tapping the screen to play displays the current point status scale and options: select a different character to ride the cart, choose upgrades to the power-ups, view the Leaderboard, return to the towns or start the mini-game.

You start with a randomly selected character in the mine cart but if you tap on the character or on the cart symbol in the lower left corner [not in all versions] you can select any character that you've bought (except Princess Celestia or Princess Luna).

From the start screen you can also choose power up upgrades by tapping the blue Upgrade Power Ups box. The power ups are collected during the game and each has a temporary effect. This upgrade option permanently boosts the effect of collected power-ups, and therefore should be considered an excellent investment for the life of your game. There are four types of power ups and thus four things that can be upgraded: boost, shield, magnet, and multiplier. Each starts at a level of 1 star and can be leveled up to 5 stars.

The green 'Play' button in the lower left corner brings you to another screen that lets you select what type of cart you wish to ride.

Much like the other mini games you can choose a game score multiplier by selecting a different minecart. The The level chosen only affects the game being played until the cart is disabled. Shards of higher tier begin appearing at respectively shorter distance from the start. The earnings in bits, gem frequency and locations, and game speed/difficulty remain unaffected.

In the Windows version they are bugged, preventing the modification of the score.

Once you click on your cart level and press the Select button, a very fast intro animation showing either Spike or a Diamond Dog close up, riding the minecart, will play. Then game play begins.

Once the game starts your only controls are to tap the screen to jump the cart, or double-tap to do a double jump. The goal is to collect as many bits, element shards, gems and power-ups as you can along the path while avoiding gaps in the track and obstacles such as barrels and diamond dogs riding minecarts. The path occasionally forks requiring you to make the snap decision to stay on the current (lower) path or jump to the upper path.

When you do eventually hit an obstacle other than the oil slick, your character is given a last-second rescue by Rainbow Dash. (If Rainbow Dash is riding the cart, the rescue is instead performed by Spitfire). You're also given a 'Revive' option that lets you continue playing the round by paying 1

; the cost to revive increases subsequently to 2

, and further revives continue to cost 100

In the Windows version, each revive resets the distance pattern to the start but the score will be kept and 2

will spawn shortly. Rides after a revive can yield 3 or 4 gems sometimes. This appears to happen when the ride before the revive missed gems which were visible or spawned very close to the point of death.

Elements of the minigame, such as Bits and minecart tracks, have certain formation patterns in which they appear. The following is a written list of the patterns, sorted by elements.

There is also a list of common combinations of the elements, such as an obstacle that often appears after a certain track formation.

Only one Power-Up can be active at once, so collecting a second Power-Up will instantly cancel the previous one.

As distance increases, measured by points earned, the minigame difficulty rises. In Android/iOS, obstacles will spawn after riding through 500 distance (250 for Windows), a horde of Diamond Dogs and Shadowbolts in 2,000 distance (Both Mobile and Windows) and track change in 3,750 distance where the game had longer gaps and complicated pathways (such as triple layers and gem getting opportunities),(Unknown for Windows). Further distances are unknown.

After going through certain distances, there is a higher chance of the next shard and a lower chance of the previous one to spawn. An en dash (–) in the table below indicates a 0% chance. The Windows version is slightly different, 2

spawn at the start.

As of update 2.6, game also can show you boards with user profile pics along the track, marking your friends' best results. However, they seem to be picked at random, and, without any other features, it's hard to tell whose result is it.

It is only available in Windows 8.1. Pressing the following keys activates the three power ups except the Boost Power Up. Their upgrades will still apply.

The cave in Ponyville

The cave in Canterlot

The interface before the game is started

Bits arranged to the word "EEYUP"

To the left is the ledge where you can jump on

Rainbow Dash to the rescue!

We're you can get "gems" 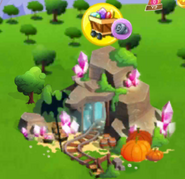 Crystal Mine at Nightmare Night.

The score is based on how far you're able to ride the mine cart without being stopped by an obstacle, starting at about 16 Points per second for the base cart (but you gain a little speed as you play longer). It may also depend on items you've collected. Like the Equestria Girls mini-game, the score from each ride is added to a progress bar with prizes marked at intervals, and you receive those prizes as you pass certain scoring milestones. To receive all 3 of a given shard prize, you MUST exit out of the mini-game.

prizes, with the shards cycling in the order Kindness