The Crispins and Clover Limited-Time Story was first ran on March 15th, 2018 and again March 15th, 2019 as part of Update 4.2 to celebrate St. Patrick's Day. Players have 12 days (9 in the re-run) to complete the story and win King Aspen as the grand prize.

The event was announced in the in-game News section earlier on the same day:

"King Aspen and his team are joining your game straight from the My Little Pony comics!

Make some room for them in your Ponyville and take part in the special upcoming Limited-Time Story!"

Quest #1: Hooves Across a Border

The Great Ponyville Brew-Off I 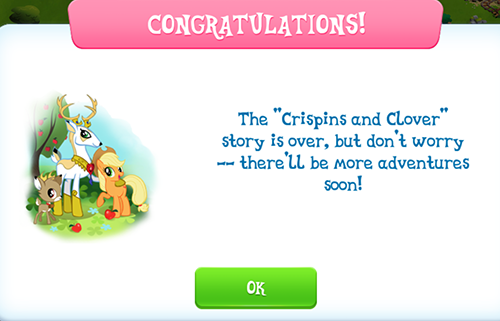 Retrieved from "https://mlp-gameloft.fandom.com/wiki/Crispins_and_Clover?oldid=86030"
Community content is available under CC-BY-SA unless otherwise noted.