Start a Wiki
The Royal Guard is a Pegasus stallion who helps to protect Equestria. He lives in the Royal Guard's House in Ponyville.

In the first update, the level required for unlocking the Royal Guard was changed to 28. It was later lowered to 18.

The Royal Guard was one of the characters available in the beta version of My Little Pony presented at My Little Pony Project 2012 New York, at a cost of 250 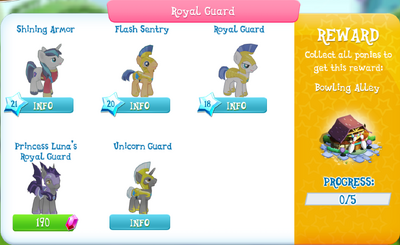 Royal Guard, Fluttershy beta shop
Add a photo to this gallery
Retrieved from "https://mlp-gameloft.fandom.com/wiki/Celestia%27s_Royal_Guard?oldid=74862"
Community content is available under CC-BY-SA unless otherwise noted.