Balloon Pop is a mini-game run by "the Flim and Flam brothers", and can be accessed by tapping on their Balloon Pop Stand. It operates as a carnival game that has balloons that can be popped for a prize. There are five games, each with a different set of prizes. There is a free game that is only available every 24 hours after the first two games (the difference between the first two is about 12 hours). The time between free games has fallen to 4 as of the 9/30/15 Update but went back to 24 hours with Update 2.9. The second game (which got added with Update 2.9) costs 3,000

respectively and can be played as often as you can afford. The last one costs 50

(added in Update 3.1). In Update 3.7, a new balloon pop called Dazzling Balloon Pop was been added into the game costing 200

but in return it guaranteed a pony or a shop each time you play. However it was removed later on as a limited time game. In Update 4.0, Clear Sky Balloon pop has been removed from the game. After the New Horizons adventure finished, a new Klugetown themed Balloon Pop was added, costing 75

. In Update 4.3 Magical Balloon Pop can now also be played by paying with 50 Crystal Coins

. Later on in Update 5.4, Royal Balloon Pop was available to play for free every 24 hours.

While you can purchase the Balloon Pop Stand in both Ponyville and Canterlot, the free game timer is shared between the two instances. However, you might get the timer reset once after building it in Canterlot.

Quests that require Balloon Pop will only credit games played in the town where the quest is available.

When a prize has been found, it cannot be taken back. After three prizes have been found (or all balloons have been popped), the game ends.

The player may get an additional prize for 3

for the free game). There is a maximum of 5 prizes per game. It is possible to win multiple different ponies in a single game of the gem version.

All ponies and decor items found this way will be sent to the player's inventory in the shop. These items can then be placed for free whenever you choose, though most ponies require you to build their home before they can arrive as usual. Unless they share the home with a pony you already acquired, in which case they will instantly arrive.

Prizes like bits and element shards count towards any active quest in the zone the game is played in.

Note: Decorations cannot be sold and prior to Update 2.9, they give experience upon obtaining. 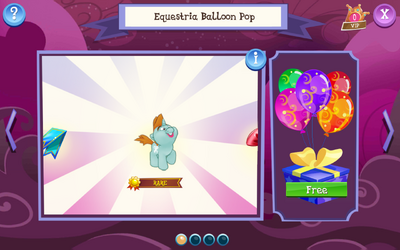 Every 4 hours, you will get a free game. 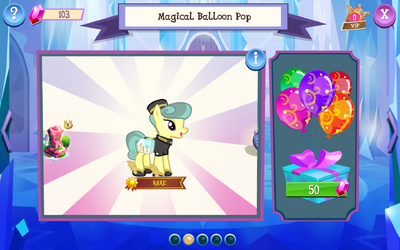 to play and the extra pops cost 7 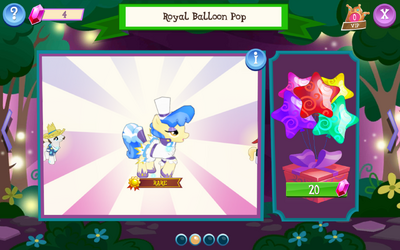 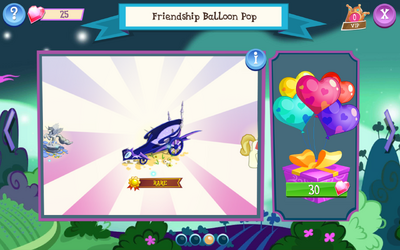 , you can play the Heart Game.

Was added in Update 4.0 and will cost you either 75 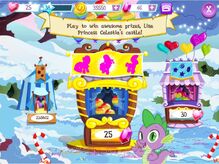 The Balloon Pop during winter. 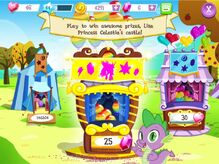 The Balloon Pop game in the first version of the game. (note the rewards displayed on the Gem lottery).

Add a photo to this gallery
Retrieved from "https://mlp-gameloft.fandom.com/wiki/Balloon_Pop?oldid=79850"
Community content is available under CC-BY-SA unless otherwise noted.