Aunt Orange is part of the Apple family and is married to Uncle Orange. She lives in The Oranges' House in Sweet Apple Acres.

Due to an oversight, prior to the Sweet Apple Acres update, Uncle and Aunt Orange did not live in the same place. Aunt Orange originally lived in Canterlot.

but was dropped down to 240

in the spa update and then again to 145 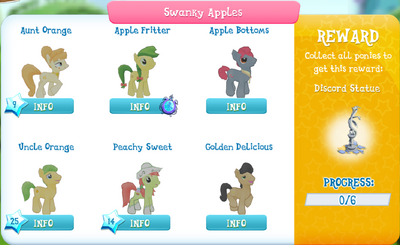 Aunt Orange Vector
Add a photo to this gallery
Retrieved from "https://mlp-gameloft.fandom.com/wiki/Aunt_Orange?oldid=72781"
Community content is available under CC-BY-SA unless otherwise noted.